Watches can be really cool, and a good watch can elevate a guy’s attire from good to gooooooood. The problem is that really cool ones often , like the Maurice LaCroix Roue Carrée Seconde (my personal favorite), often have really uncool price tags (like the Roue Carree’s $9,900 price tag). Timex’s $50 Weekender standby is all good, but it’s still missing that special je ne sais quoi. Domeni Co., which is now crowdfunding on Kickstarter, is aiming to fix that. 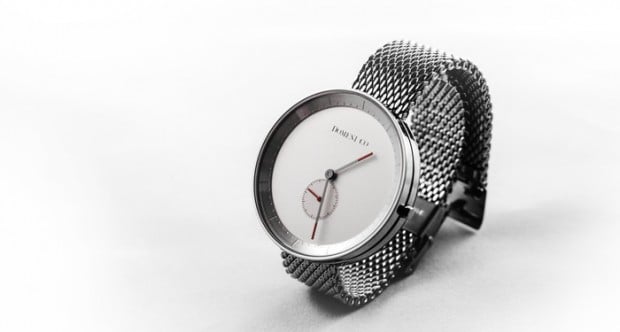 Dominick Cullari named Domeni Co. after his grandfather Domenico, who passed his own watch down and started a lifelong obsession with watches that began with doodling them when the other kids “doodled cars or shoes.” Now, after a ton of sketches and a lot of thought, the first Domeni Co. watch has been designed and is set to hit the market soon. Early backers can pick one up for $135, after which the price will jump to $165. The watches will run $215 at retail. No, it’s not Timex cheap, but it is within most people’s range for a special occasion. Luckily, it looks and sounds every bit like a much more expensive watch.