This is Totem, yet another VR headset on Kickstarter. I’m posting about it, however, because it can do some really cool things that other VR goggles we’ve seen can’t, and I don’t think the developers have even realized all of the potential they have with this hardware design yet. 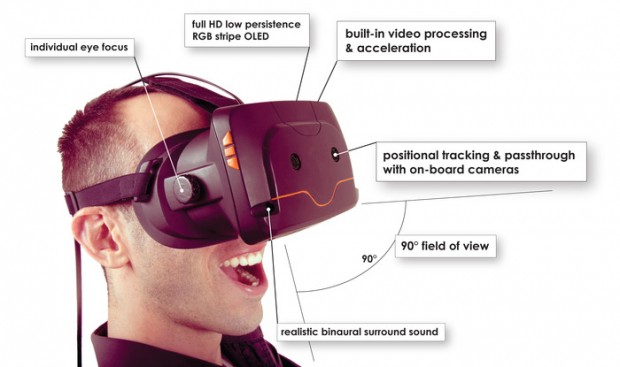 This guy looks a little too enthusiastic.

The Totem features an integrated graphics processor and two forward facing cameras, and that makes all the difference. Due to the onboard processing power, the Totem is compatible with a standard Side-by-Side HDMI signal that’s used for 3D movies and some games as well as all the stuff that works with Oculus Rift. What’s more interesting is that pair of forward facing cameras. At the switch of a button, the Totem can display the real world, so that gamers can look around and be aware of their surroundings once more.

What the creators didn’t mention is the potential to use both the cameras’ view of the real world and 3D graphics at the same time to accomplish some things that we all really want to see. A developer could create an augmented reality game for the Totem in which players actually run around a physical arena, but could throw rendered grenades/fireballs/bolas at each other. It’s even feasible that some software could be taught what a user’s peripherals and limbs look like.

The biggest problem with VR for a lot of simulations right now is that players can’t see their gear while playing. I want to be fully immersed in iRacing, but still be able to glance down and see the buttons on the real, physical steering wheel and shifter in front of me. With a bit of clever coding, the Totem could do this.

If you’re interested in getting your hands on a Totem VR headset, you can snag one on Kickstarter with a minimum pledge of $450(USD).