If the 3D Pocketcopter is the real deal, you won’t need to shell out hundreds of dollars for a simple airborne camera. The battery-powered device is controlled wirelessly over Wi-Fi or Bluetooth and works with iOS, Android and Windows Phone devices. It has a pair of propellers that lift it up to 10m (approx. 33ft.) in the air for up to 25min. on a single charge. 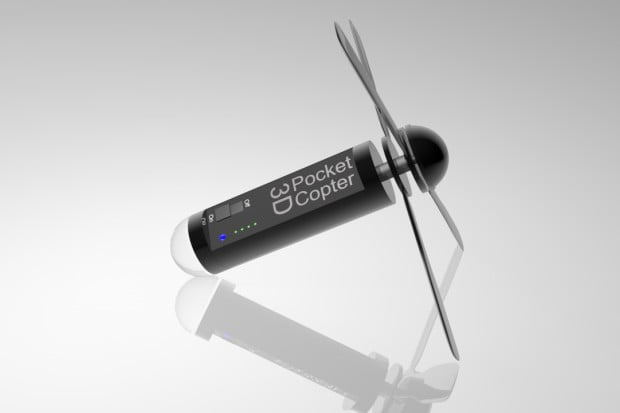 Another compelling feature of the 3D Pocketcopter is that you can remove its propellers then mount it or use it as a handheld camera. In that scenario you’ll get up to 5 hours of shooting or recording on a single charge. Apparently it can even shoot 3D video as well. It stores videos and photos on a microSD card, and you’ll be able to upload to various social media sites from within its app.

As of this writing the 3D Pocketcopter’s Indiegogo fundraiser has only less than two days left and it’s already fully funded; you can get one as a reward by pledging at least €89 (~$115 USD). But as with all crowdfunded ventures, you might want to wait for more demos and even reviews to come out before putting money down, especially in this case where all we have are concept images and a barely convincing video. We don’t even know the specs of the camera inside.