For a lot of people, paying for a major surgery for their beloved dog or cat is too much. As sad as it is, the animal’s time has come. As an animal gets smaller and less cuddly, the likelihood of major veterinary care also seems to get smaller. Pet mice are way less likely to see a vet regularly than a dog, and goldfish are just straight up screwed, most of the time. People buy them for $0.19 without realizing that it’s going to cost hundreds to keep the things alive. This goldfish owner, who is “quite attached” to her fish, is clearly ready and willing to give his little colorful companion whatever is needed. 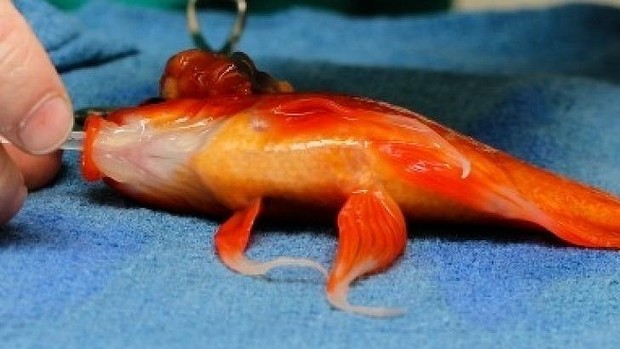 This Australian goldfish, named “George,” just had a head tumor removed at the Lort Smith Animal Hospital in Melbourne, Australia. George was under general anesthesia for 45 minutes. Dr. Tristan Rich said of the procedure: “it’s quite fiddly, as you can imagine with an 80-gram fish, and you’ve got to make sure you can control any blood loss. He can only lose about half a mil.” Prior to the operation, George was unable to eat or swim normally, and was starting to “really suffer.”

Dr. Rich said that “George is now doing great; he spent a few days in the tank, and is now swimming happily in the pond.”

Carving a Batmobile from a Speaker Cabinet