King Down: The King of the Hill Prequel to Chess

Who are these two armies, standing in their proud and identical formations before battle? Why are they fighting a chromatically driven battle? What pre-battle maneuver gave the white king the opportunity to get the first move? What we need here is a prequel. We need J.J. Abrams to step in and give us the geeky prequel that we need. That’s not going to happen, so instead we’re getting King Down, an interesting looking board game for two to four players that’s hitting stretch goals on Kickstarter right now. 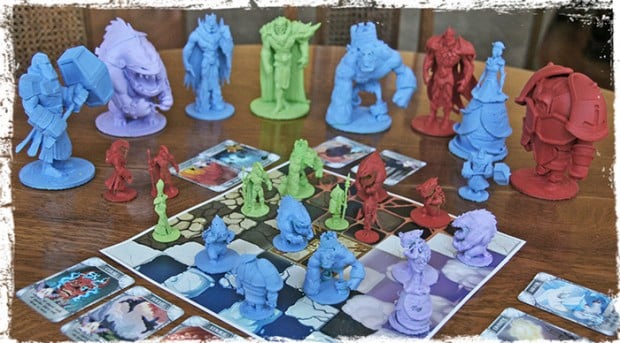 The game is played with sets of fantasy-inspired chess pieces, that move normally upon the board, but that’s where the similarities end. Pieces don’t begin on the board; rather, they are summoned from the player’s board edge via a deck of cards. There are also cards that work as magic spells that affect gameplay in weird new ways. Victory is decided by capturing enemy pieces, and by holding the center four tiles of the board, known as the “capitol.” Putting a king in the capitol gets bonus points.

All in all, we think this looks like a great game for both people who love chess, but want a little more variety, and people who aren’t such big fans of the permutational mind games required by chess, but like the general idea.