A dude showed up at the Maker Faire in his neck of the woods recently and he had a slick device, a wrist-mounted flamethrower. This flamethrower is different from the wrist-mounted design we talked about in the past. The builder of this one is a guy named Stephen Hawes. 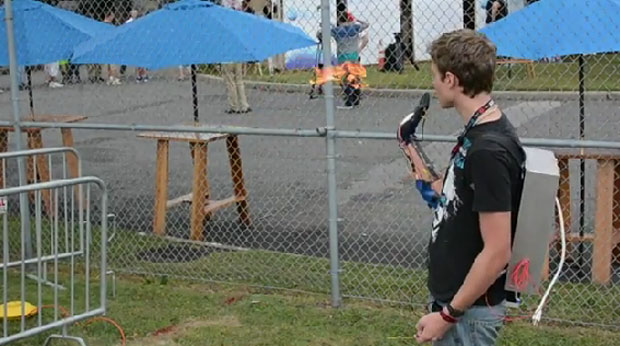 Rather than having a tank of fuel mounted on the wrist, Hawes uses a backpack that looks like something out of Ghostbusters to me. The device adjusts the height of the flame depending how far the user bends the wrist.

It doesn’t appear that flames ever shoot too far. This is sort of like a DIY Pyro from X-Men setup. Apparently, Stephen had his own fire marshal assigned during the entire event. Frankly, I’m not even sure it’s legal to build your own flamethrower.