This poor rat had his little spinal cord severed in a … let’s tell him it was an accident; a freak lab accident. While yes, it does indeed suck to be him, the good news is that he’s walking again. The Swiss Federal Institute for Technology (EPFL) has used a new method of spinal stimulation to help the furry little dude walk again.. That’s right, they electrically stimulate the spinal cord to tell the legs what to do. 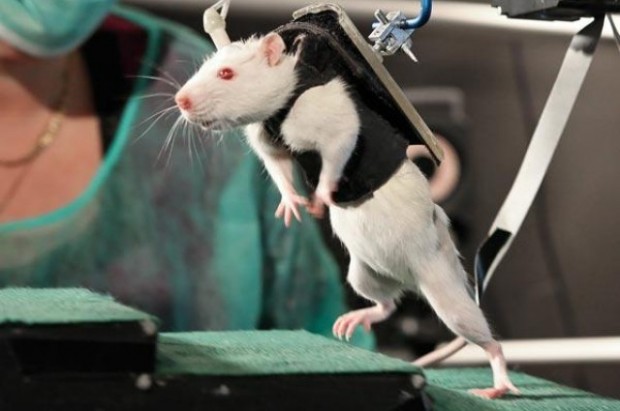 Normally, spinal stimulation is difficult or impossible because any given amplitude and frequency of electric pulses rarely works more then once. That’s right, severed spinal cords adapt to not survive, like the galaxy’s crappiest borg. EPFL, like Captain Picard’s crew, have created a device that automatically adjusts the pulses so that the spine can learn properly. The result is that they’ve developed algorithms that allow them to electrically puppet the rats’ bodies into walking and even climbing stairs.

What’s actually cool about this, rather than just impressive, but sad and creepy, is that human trials are planned for the coming summer. Of course, rather than a gaggle of scientists forcing you to walk up stairs, the plan is to use this in concert with existing technology to help paralyzed people regain control of their lost limbs. That’s awesome.