One of the coolest features of the Nintendo Wii U was the fact that the Gamepad allows for game designers to give information to one player without giving it to the others. The Oculus Rift can do this, but to a much greater extreme. A player can have an entirely private experience; that’s useful in competitive games, and very, very interesting in co-op games. 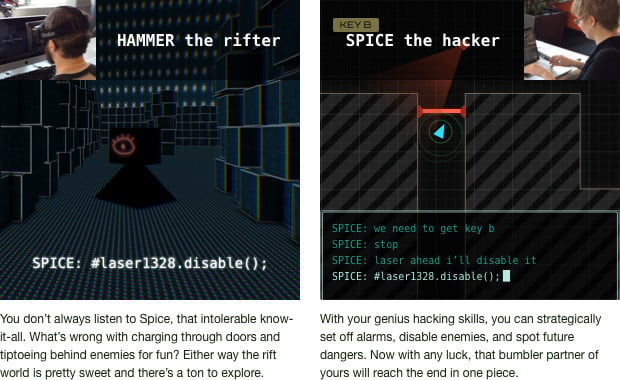 Take Black Hat Oculus, which is currently on Kickstarter, for example. It’s a game meant to be played by two people on one computer. The person wearing the rift, Hammer, has to navigate and infiltrate a level that looks like a cyberpunk version of Minecraft (not my jam, but there are plenty of people who will love it). The catch is that he can’t do it alone; he needs a friendly hacker, Spice, to help disable traps and security measure and keep an eye out for enemies.

It all has a very Matrix-esque vibe to it, and we can’t help but long for a world in which this concept would be applied to that particular piece of IP. C’est la vie, non?

Pledge at least $10(USD) over on Kickstarter to grab a digital download of the game once it’s released.