If you follow the tech world at all, you know about the “bendgate” saga with the new iPhone 6 Plus. Apple says that a handful of the larger iPhone models bent in the pockets of owners. The bending of the iPhone 6 Plus kicked off a slew of tests to show what phones will bend and which ones won’t. 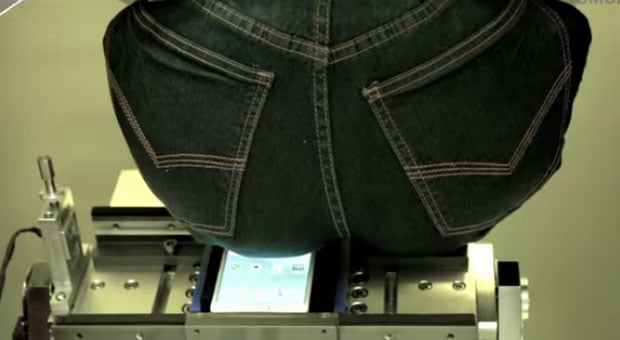 Samsung has devised the ultimate test for its Galaxy Note 4. Not only did they use the boring three-point pressure test where a machine presses on the phone to see if it bends or breaks. The Note 4 passed that test. Samsung also went the extra mile and used a high-tech robotic butt to smash its ass into the smartphone hundreds of times.

The robotic butt was tuned to simulate a 220 pound man sitting on the smartphone. Naturally, the Note 4 survived the buttocks beat down as well. The robot butt even wore jeans.

Of course, if you want to be sure your phone doesn’t get damaged from sitting on it, just keep it in your front pocket.