A few months ago we saw a silly viral ad featuring a malfunctioning robot arm. HelloSpoon is the kinder version of that sadistic ‘bot. Made by Luis García González, the feeding robot is meant to help the disabled, the elderly and children to eat. 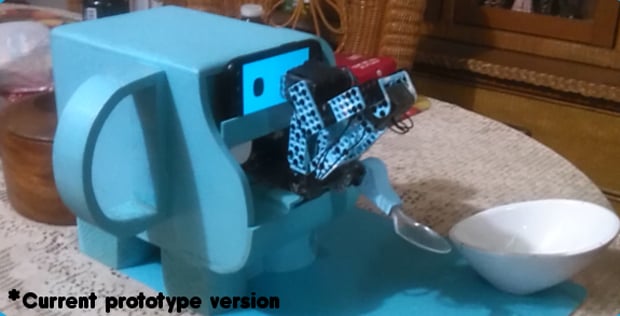 To compensate for its crude appearance, HelloSpoon comes with a mobile app that’s bursting with warm encouragement, which should make it a hit with kids. For example, it plays music as it scoops food and then cheers when you eat the food it offered. Luis is aware that there are already similar robots for sale, but his goal is for HelloSpoon to cost 90% less than these existing products, which typically sell for $4,000 to $5,000 (USD).

Make your browser say “Aah” and feed it this link to Indiegogo, where you can pledge at least $399 to receive a beta version of HelloSpoon as a reward. There’s also a developer kit reward that you can get by pledging at least $199.