Someone 3D-Printed a Machine That Folds And Launches Paper Planes

Do you remember when we were kids? We had to fold our own damn paper airplanes. It took whole minutes… in the snow… both ways. Now some inventor has created this device that will surely turn the next generation into a bunch of lazy slobs who never move out of their parents’ houses and think they’re soooooo special. He 3D-Printed a fully automatic paper plane gun. 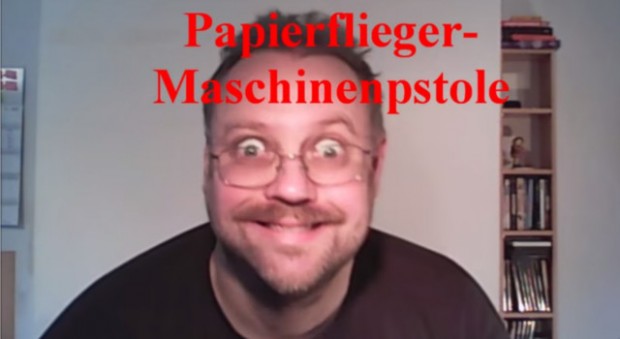 Yeah, you just load it up with paper and it automatically folds the planes and launches them. Lazy kids won’t even have to throw them. Now we know that we are going to be the last great generation, just like how every other generation has said the exact same thing. It will be real for us though; we can see the (totally not imagined) writing on the (totally not imagined) wall.

In all honesty, however, this is a pretty cool piece of engineering. Silly toys like this are amusing, but the fact that a man with access to a 3D printer is capable of whipping up a device with this complicated of a function says a lot about how cool the future is going to be. Also, I was originally going to write about a new watch I found until I found out that it runs on a AAA battery. Who the hell puts a AAA in a watch?