Earlier this year I featured a homemade ping pong playing robot… or so I thought. It turns out that it was merely a hoax made by two animators. But this robot made by automation expert Omron is the real deal. Its humongous body and brain show how hard it is for robots to perform what would be a simple task for a human. On the other hand, its forgiving nature shows just how smart robots can get. 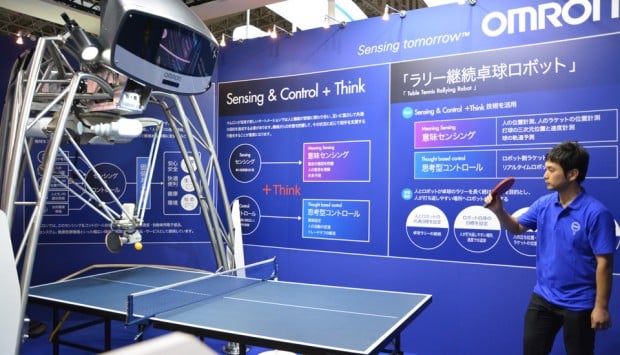 Engadget took the image above at the 2014 Combined Exhibition of Advanced Technologies or CEATEC, where U.S. journalists gave the robot an award for innovation. The robot has two vision sensors, one to track the ball and one to analyze the motion and position of the puny human that it’s up against. Omron told Engadget that “the robot’s strikes would be too fast if running at full capacity”, but the company deliberately programmed it so that it would hit the ball to a spot that would be easy for its opponent to return. This seemingly lame decision was actually one hell of a challenge for Omron.

Omron said that because the robot has to take into account how best to return the ball so that the player can continue the rally, the robot’s calculations and movement had to have “a 1/1000 of a second accuracy”, or else it would fail to return the ball. Here’s a much longer video of the robot at CEATEC by YouTuber ARMdevices.net:

Despite its lightning-fast reflexes, the robot does have a legitimate handicap. As shown in the videos, its unified arms are too short to reach across its entire half. The way it was positioned at CEATEC it wouldn’t be able to reach the middle of the table. Then there’s the fact that its immobile. Still, Omron is proud to have made a robot that can adapt to a changing environment, and a human-loving one at that.

[via Omron via Engadget]