You might have heard of Anki Drive, the racing game where you control a toy car with your mobile device and race on a track against computer-controlled cars. Ken Kawamoto and Tomoaki Akitomi made their own robot racing game based on Romo, a programmable robot powered by the iPhone. But instead of having a set track and preset power ups, their RomoCart system allows for randomly generated tracks and power ups. 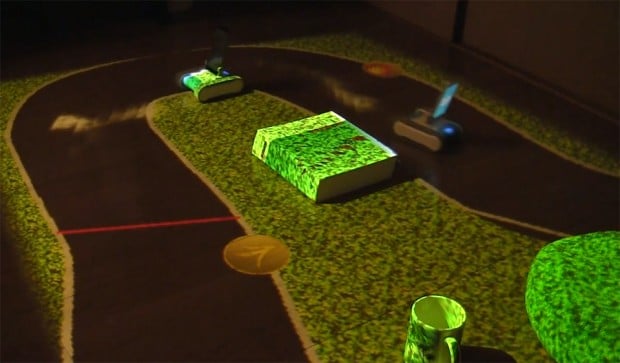 With RomoCart, you generate a race track by placing objects on the floor. The RomoCart program takes input from a depth-sensing camera such as the Kinect or Xtion Pro Live to create a virtual track around those objects. The track and other virtual elements will be displayed on the floor through a projector. You can also add items or power ups similar to Mario Kart, such as missiles and bananas. You can even designate some of the objects you placed on the floor as weapons. In one game Ken and Tomoaki turned a teddy bear into a missile turret. 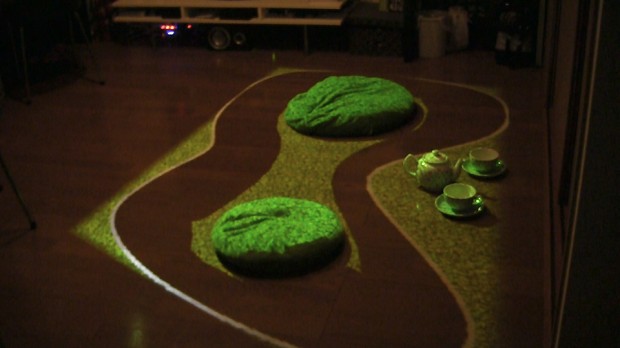 The RomoCart program handles the effects of the virtual elements on the robots, while players control the movement and abilities of their Romo using a gamepad. Finally, the RomoCart program also uses the depth-sensing camera to detect your presence, allowing you to interact with some of the game’s virtual elements. For example, you can step on a missile, destroying it to protect your robot.

It would’ve been a nice touch if you could death stare your opponents. Head to Ken’s blog for more on RomoCart.