So you’ve finished some of your favorite game more times than you can count. You know all the shortcuts and can even finish them in one sitting. What’s your next challenge? If you’re YouTuber KarlJobst, you play and finish three Nintendo 64 games. At once. In under an hour. What. 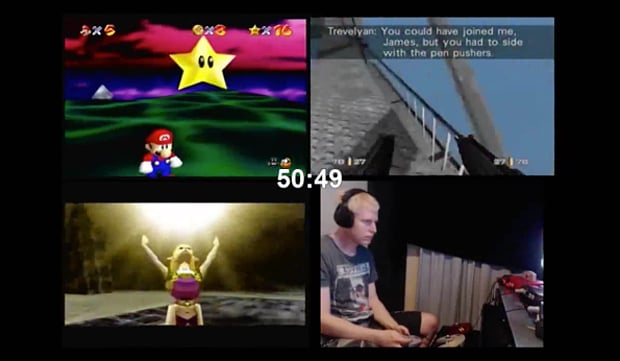 Karljobst fired up Super Mario 64, GoldenEye 007 and The Legend of Zelda: Ocarina of Time on three different N64 consoles and TVs, then cycled through the three games as cutscenes played on the other two. Of course, he inevitably let Link, Mario or Bond sit idle from time to time so he could focus on one game. He finished GoldenEye 007 in 21:51, Ocarina of Time in 18:10 and Super Mario 64 (a 16-star run) in 15:44. Don’t believe me? Watch and watch and watch:

I guess the opposite of this would be watching Tarn Adams complete Dwarf Fortress.