Even if you use the Internet only casually – thanks for spending time here! – chances are several companies have gathered a bit of data about you, or at least your online habits. These trawlers range from big fish such as Facebook, Google or your government to obscure advertising companies and perhaps even hackers. Artist collective Blast Theory wants to expose and explore this data mining with Karen, a virtual friend. 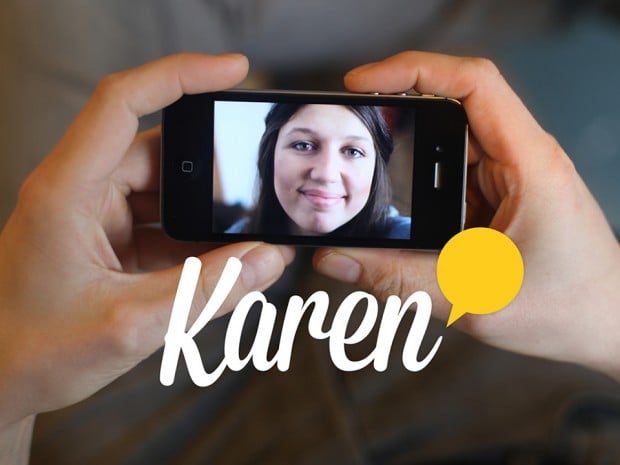 Karen is a mobile app that gets to know you by asking personal questions. With your permission, she will also mine your social profile and location data. Blast Theory’s Sarah Julia Clark will serve as the face and voice of Karen, but the idea is that your experience with her will be unique, because her responses will be based on what you she knows about you. As if that wasn’t creepy enough, she will call you on her own, like a friend sending you a message, asking for your attention.

Blast Theory says the experiment will end “in a live event for an invited group of the most committed participants – but you can enjoy Karen as a complete experience without going to the live event.”

Pledge at least £10 (~$16 USD) on Kickstarter to be one of the first to get the app as a reward. The app will be released for free to everyone shortly after the Kickstarter backers get it, but Blast Theory says it will have in-app purchases for additional features. Karen is probably going to be exclusive to iOS, though if the Kickstarter does well it may be released to Android as well. I don’t know if that’s a promise or a threat. Seriously though, I’m a bit worried for Sarah.