J. M. De Cristofaro aka Johngineer must be having a great week. He recently shared his custom made wristwatch, the ChronodeVFD, and its simple yet eye-catching design has earned the approval of the Internet, including no less than the cyberpunk lord William Gibson. One look at it and you’ll see why it’s gone viral. 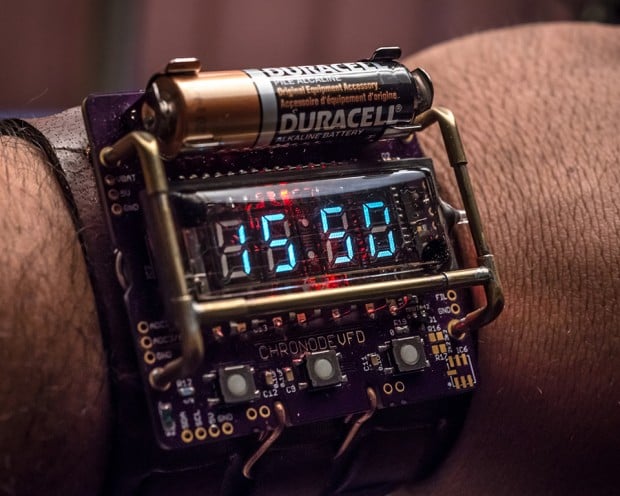 Johngineer designed his watch around a vacuum fluorescent display or VFD. Like Nixie tubes, VFDs have been made obsolete by LEDs, but they’re still used in some electronic devices because they are cheap, bright and durable. The specific VFD that Johngineer used is a Soviet surplus called IVL2-7/5. It’s a small and flat tube with a transparent backing and uses relatively little power. I say relatively because according to Johngineer the watch lasts only a few hours on a single AA battery. The watch is controlled by an ATMega 88 AVR and tells the time using a DS3231 I2C real time clock.

The ChronodeVFD also has a light sensor, a barometer and an accelerometer, though Johngineer has left them unactivated for now. A brass “roll cage” protects the display and gives the watch a steampunk character. Johngineer used a simple leather cuff as a strap.

Head to Johngineer’s blog for more details on his watch, and perhaps even convince him to make more of it for sale.