We all know that Marvel flicks are making enough money at the box office that they will keep coming like the Hulk on a caffeine bender. Marvel has now unveiled its plans for movies for the next several years and fans will be very excited. 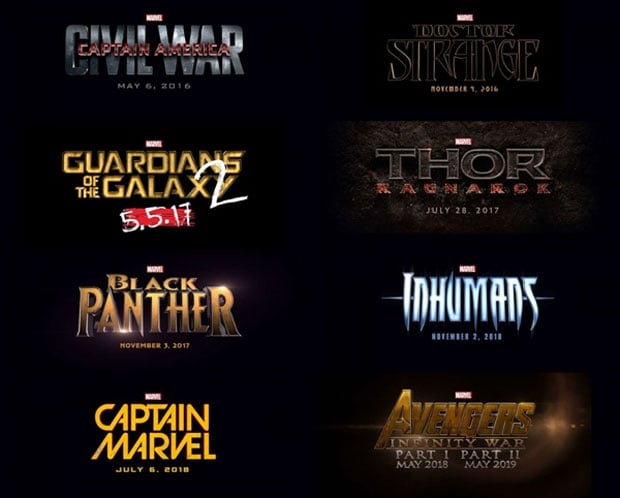 The movie plans have some familiar titles in there, like Guardians of the Galaxy 2, the sequel to one of my favorite Marvel flicks of all time. There are also several new properties in there that geeks will be excited about. The dates start in May 2016 with a new Captain America flick hitting theaters called Captain America Civil War.

In November 2016, we get Doctor Strange, and rumor has it that Benedict Cumberbatch might play the title character. Next on the list is Guardians of the Galaxy 2 set for May 2017. Thor: Ragnarok will land July 28, 2017 followed by Black Panther in November 2017. Captain Marvel is coming July 6, 2018, Inhumans November 2, 2018, and then a pair of Avengers flicks. Avengers: Infinity War Part 1 will come May 4 2018 with Avengers: Infinity War Part 2 landing May 3, 2019.

Which movies are you looking forward to the most.