Remember the old days when you played Atari’s Pong console? That was all that the console played, and we loved hitting that square shaped ball back and forth. We just didn’t know any better. It seems so slow now. Well, this isn’t your grandfather’s Pong. 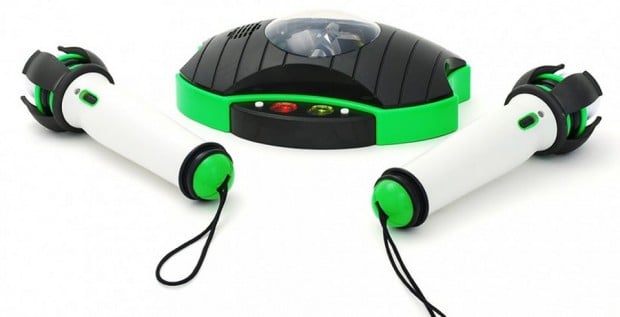 This Virtual Pong game from Shaper Image is a real-world version of the game with a digitally-projected ball and everything. At last we are living in the TRON future, my friends. You have two wireless paddles to hit the virtual ball with. You might even lose a few pounds as you get off the couch and compete.

The center base station projects an orb of colored light back and forth between the players. You hit it with your “rackets” trying not to make a racket as you destroy mom’s knick knacks. It works like the Wii, though it looks more dangerous to your surroundings. Virtual Pong is available now from Sharper Image for $59.99(USD).