In 1992, amateur paleontologist Stan Sacrison discovered the bones of a Tyrannosaurus rex in South Dakota. The resulting skeleton was named after Stan. Made of 199 bones, STAN is world famous for being one of the most complete specimens ever found. He hangs out at the Black Hills Institute Museum (BHI Museum), but BHI also sells made to order 1:1 replicas of STAN. 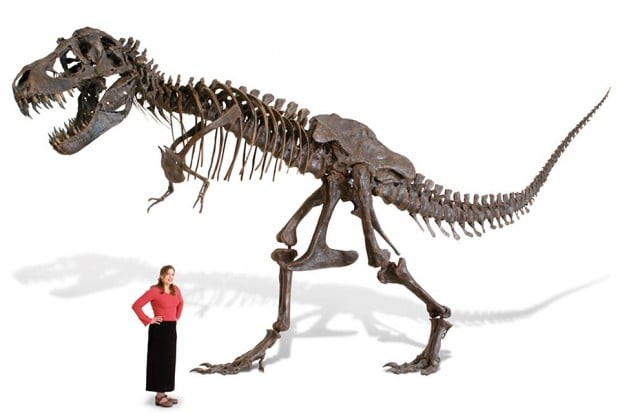 STAN is about 15ft. tall and 40ft. wide. BHI makes his replicas out of resin, with steel support structures embedded in the “bones.” BHI can send a crew to assemble the skeleton in any anatomically possible pose. Sorry, millionaire who wants a life-size T-rex skeleton that’s scratching its nose. BHI has made several replicas of STAN, many of them used in museums. Here’s one of STAN’s clones, chilling at the University of Manchester’s museum:

As you may have expected, STAN’s skeleton is going to cost you. You can order one from Hammacher Schlemmer or directly from BHI for $100,000 (USD).