We often joke that our laptops, consoles and other devices get warm enough to cook on. A German company called Cloud & Heat took that idea seriously and is deploying it on a large scale. The company offers cloud computing and cloud storage services, but instead of having large data centers its servers are installed all over Germany and used as radiators and water heaters. 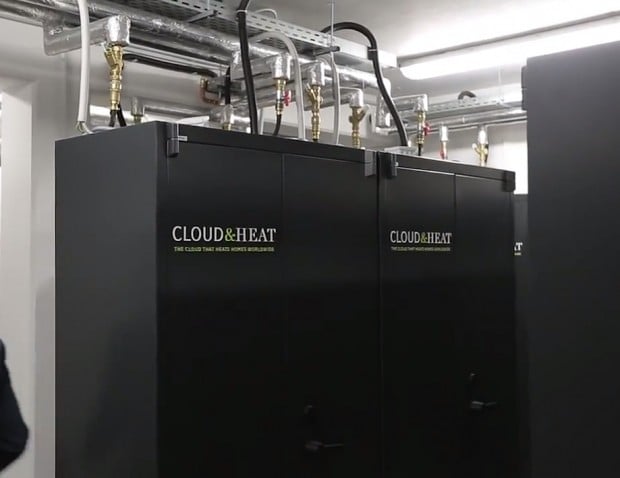 As you’ll see in Cloud & Heat’s commercial below, this setup has a multitude of benefits. First, it makes good use of the heat that the servers generate. According to the company 90% of the electricity that servers use is transformed into heat, which would otherwise be wasted in conventional data centers. Second, it (supposedly) results in lower prices for their cloud service clients, because the company saves on air conditioning and infrastructure. Finally, the reduced use of energy – from people using less heaters and the company using less air conditioners – is good for the environment.

Here’s another promo video for Cloud & Heat. It’s in German, but it shows the actual servers being used to heat water and air in buildings. According to Cloud & Heat, it will install air vents to let excess heat out so that the servers won’t be a nuisance during summer. Cloud service clients on the other hand won’t have to worry about their data being stolen or destroyed because the servers are encased in fireproof and sturdy cabinets.

Cloud & Heat’s cloud services vary in price, while German residents can procure server cabinets as heaters for a one time payment of €12,000 (~$15,000 USD). That’s good for at least 15 years, and the company will bear all maintenance, repair, electric and Internet costs associated with the servers. Float on to Cloud & Heat’s website for more info.