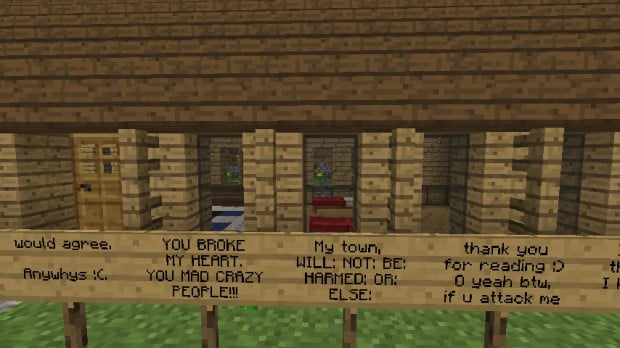 You see, Tom somehow got into a private PVP and roleplaying Minecraft server, which is apparently filled with adults. At this point two things went incredibly wrong. First, the server’s admin decided to keep Tom, and the community tried to be nice to him. But the camaraderie did not last. Tom failed to grasp the concept of PVP and would get mad if he was attacked. Long story short, he was banned from the server. And now we come to the second mistake. From here on out there will be NSFW language. There will also be blood. Here’s Redditor streetbum’s summary of Tom’s story:

Here are the signs that streetbum was talking about:

If you’re done wiping the tears from your eyes, Redditor Rapn3rd has more. Apparently, a few minutes before he was banned, Tom “hastily dug a hole in the ground, and left us this final message”:

All Minecraft servers should have that monument. Before you judge Tom, keep in mind he’s a kid. A 14-year old kid who can’t spell, but still a kid. His inability to understand why his friends were attacking him is at once pathetic and heartbreaking, and his messages betray a streak of creativity. Imagine if a kid left you threats made out of LEGO. If we’re going to be honest with ourselves, we’ve all had our Tom moments. Except he has a Reddit thread dedicated to his antics. And a friend in anymouse :3 lol jk… or is he :3.