When I was growing up, my parents let me watch pretty much any movie I wanted when it came out on VHS. One of my favorites was RoboCop. Something about a cyborg robot with a gun that came out of his thigh was very appealing to my younger self. I’ve tried to watch the original films now that I am an adult, and they are so cheesy it hurts. 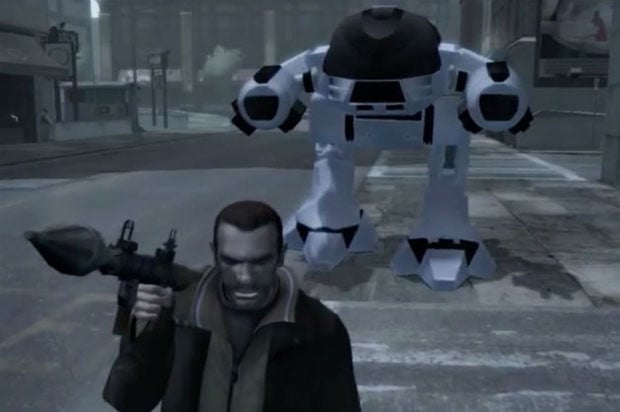 If you are a fan of GTA IV and RoboCop of the ’80s, JulioNIB has made a mod that you will want to check out. The mod brings ED-209 from the first RoboCop film to the virtual streets of GTA IV. ED-209 isn’t there to stop you from rampaging in the game. In fact, you can use the robot as a bodyguard.

Better yet, you can take direct control of the robot and use it to spray hot metal death at the citizens of Liberty City. I always though ED-209 looked like a walking microphone, and the virtual creation looks just like the one from the film.

Check out the videos to see the mod in action.