The US Navy Just Deployed a Laser Cannon, Has Awful Taste in Music

We’ve been making movies about soldiers, sailors, and airmen firing lasers at each other for a long time now. Now you can watch a video of what it actually looks like when the US Navy uses its new laser weapons system (LaWS) to take on two boats and a drone. Unsurprisingly, it’s not nearly as dramatic and flashy as the sci-fi equivalents, but it looks to be very effective. 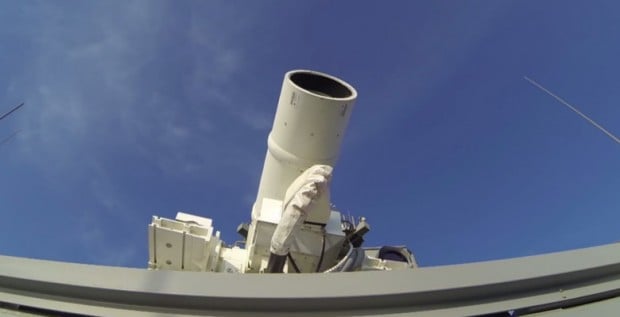 Basically, a dude with a video game controller tells the LaWS what it’s aiming for, and the laser tracks the target and then burns the ever-living crap out of it. For the purposes of the video and making the shooting of a laser cannon at least somewhat dramatic, the Navy made sure that both of the boats had an explosive element to attack. The drone, on the other hand, just drops unceremoniously from the sky after the LaWS lines up. The part that’s good for the average tax-payer: it costs less than a dollar per shot to operate the LaWS.