Some of you may know YouTuber Buddhanz as the guy who owns an angry ram named Angry Ram. If his pet goat is off the rails, Buddhanz is off the grid. The resourceful Kiwi is able to generate enough power for daily use thanks to a nearby stream and his washing machine generator. 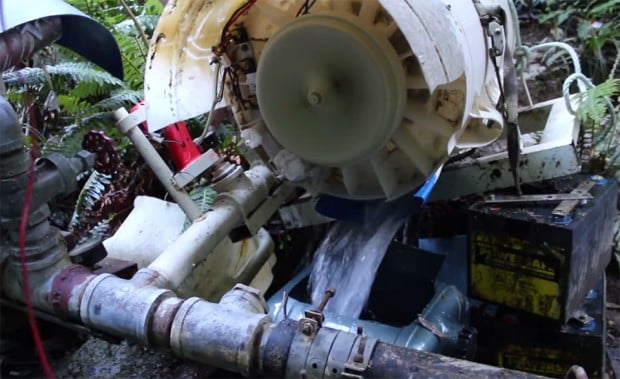 Buddhanz laid several hundred feet of pipes from a nearby stream so that he’d have enough pressure to drive his generator. Then he rewired the stator from an old washing machine so that it would turn the motion of the motor into electricity (the opposite of its original function). Then he attached a turbine called a Pelton wheel to the washing machine’s motor. Here’s how he hacked the stator:

And here he shows how he assembled the latest version of his generator:

In case you didn’t watch the video above, Buddhanz said his system generates over 600W of power out of a 45PSI water flow. He stores the electricity in a battery and uses the excess for his heaters. I’d imagine he’s powering a washing machine with his washing machine as well. Check out his YouTube page for more on his generator.