Les Baugh lost both of his arms in an electrical accident, and I’m pretty sure that sucked far, far more than I can imagine. While they can never replace what he lost, he’s now been outfitted with a pair of really badass cyborg arms from the John Hopkins University Applied Physics Laboratory. They’re attached wirelessly to his nerve endings, which means he’s controlling them the old fashioned way: with his mind. At the moment he needs to pause between movements, but it’s an awesome step forward in prosthetic technology. 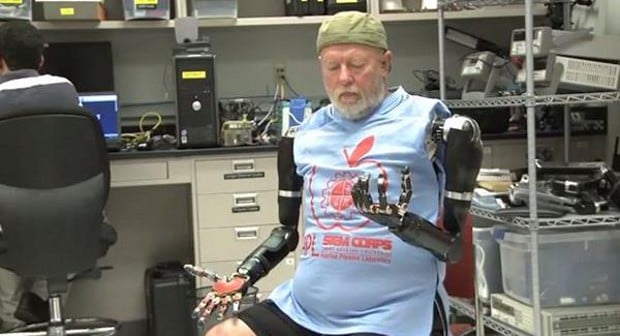 Now what I can’t help but notice is this: he has a dramatic name, he lost his arms in a dramatic accident involving electricity, and he’s replacing those arms with electrically driven robots arms. If that’s not a superhero’s or supervillain’s origin story, I don’t know what is.