A few months ago we talked about how the PlayStation 4’s Remote Play feature – which is officially exclusive to the PS Vita and the Z3 mobile devices – might be modified so that it can be used on any Android 4.0+ device. That indeed came to pass, and the modded Android app is now out in the wild. So what’s next? It might be playing with the PS4 on a PC. 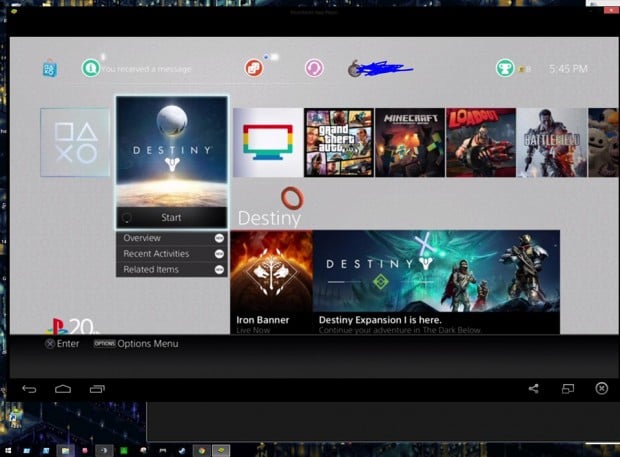 The screenshot above is from Redditor crashtheface. He used an Android emulator called Bluestacks to run the modded PS4 Remote Play app on his Windows PC. Right now, it looks like this is as far as you can go, as there’s currently no easy way to use the DualShock 4 controller with Bluestacks (the folks behind the Sixaxis app appear to be working on it though). Not to mention the various Internet connectivity problems that many testers are experiencing at the moment.

So why would you do this? For one thing, it lets you connect to your PS4 over the Internet. The vanilla Remote Play app requires that the PS4 and the connected Vita or Z3 device both be on the same Wi-Fi network. But if this hack works, you might be able to use your PS4 from miles away, as long as your Internet connection is up to it.

Also, Redditor iAMA_Leb_AMA humorously pointed out that we could go deeper: emulate Android on your PC, then get a remote desktop app on your iOS device and bam! PS4 on your iPhone. With massive lag. Then AirPlay your iPhone’s display to your TV via Apple TV and bam! Space will fold in on itself.