Solid Snake and Fallout are wrong. War does change. At this very moment, hackers and their legion of enslaved computers are waging an invisible war online. Perhaps they’re trying to steal information or shut down certain websites. Online security company Norse makes this cutting edge battle less abstract with its live attack map. 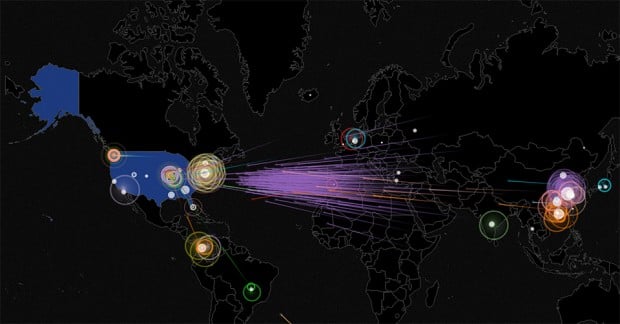 The map shows real time cyber attacks from known malicious IP addresses from over 40 countries, though as of this writing there might as well be only two countries on the map: China and the USA. These two countries have the most numerous attackers, are the most frequently attacked and yes, are mostly attacking each other. China is sending waves of attacks to St. Louis, Missouri as I’m typing this. If you’re having trouble viewing the map, here’s a demo video from Norse: