Extracting Faces from Eye Reflections in Photographs: Zoom in and Enhance

From Blade Runner to CSI, popular fiction often stretches the capabilities of photography in the service of plot. But technology has a way of catching up. Last year, psychologists Rob Jenkins and Christie Kerr were able to extract identifiable faces that were merely reflected in the eyes of a photographed person.

Does it sound too good to be true? Well, yes and no. See, Jenkins and Kerr used a 39MP Hasselblad H2D camera and ample lighting for their study. Their “bystanders” were also positioned optimally in front of the subject. 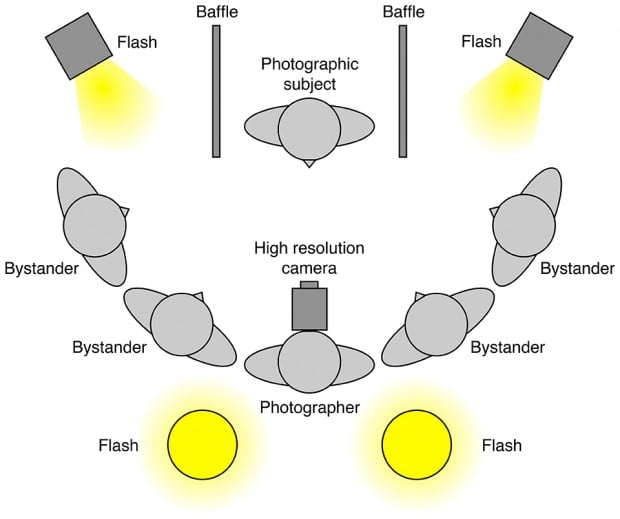 On the other hand, the extracted reflected faces were only an incredibly small part of the high resolution portraits they took, yet they were still identifiable. Jenkins and Kerr’s highest resolution photo was 5,412 pixels wide by 7,216 pixels high, but the reflected faces they extracted were only around 27 to 36 pixels wide by 42 to 56 pixels high.

These reflections were then blown up to about 400 pixels high and cleaned up in Adobe Photoshop before being shown to observers for identification.

Jenkins and Kerr were surprised at their results and came up with two conclusions. First, at the pace of camera technology this method could indeed be practical someday. Second, humans are awesome at identifying faces.

The two also think it could be possible to create a 3D model of the scene in front of the subject using the reflections from both of the subject’s eyes. Now that’s Batman territory. Head to PLOS ONE to read Jenkins and Kerr’s paper.