Subtitled R2-D2 Thinks Luke is a Pain in the Ass

One of the things I always wondered about Star Wars is exactly what was R2-D2 saying when he was beeping away excitedly. He spoke some sort of beepy robot language that only C-3P0 seemed to fully understand. Why didn’t they just give him subtitles like Jabba? 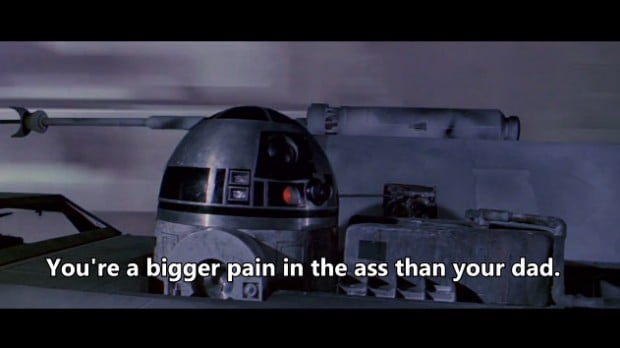 I think R2 would be a snarky little robot, sort of like a robotic version of Deadpool. A video has turned up in which Eclectic Method has taken R2’s beeps and subtitled them over some scenes from the classic original trilogy and the new films.

Turns out, at least in this translation, that R2 is an impertinent little guy. He also doesn’t think that Luke is the best pilot in the galaxy. Watch the video for yourself to see what R2-D2 has to say.