This Turtle Robot Creates Works of Art on the Beach

This is Beachbot, the world’s first autonomous sand art robot. It was developed by ETH Zurich and the Zurich division of Disney Research. Basically, it’s a Disney Mutant Robot Turtle – further proof that Disney wants to take over the world with cuteness. 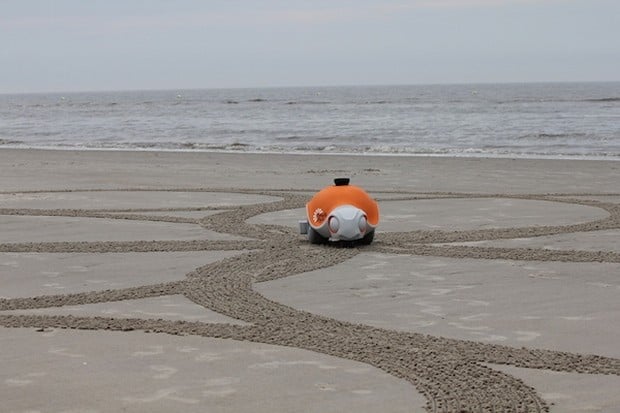 The autonomous robot draws huge patterns using a rake it can raise and lower into the sand. Beachbot uses a laser scanner, Wi-Fi, an inertial measurement unit, and four reflective poles to create art on a large scale. The machine knows where it should draw, because the researchers place four poles around a 10 meter x 10 meter area. Beachbot then uses the laser scanner on its onboard computer to detect those poles and recognize the area as its canvas.

So what is the point? Well, Disney Research Zurich head Paul Beardsley says, “The dream is to create huge amazing drawings like the Nazca Lines.”

That doesn’t really explain much. I translate that as “We are Disney. Because we can. Now shut up and wait for the new Star Wars.”