Science is a great excuse to do just about anything crazy. Crossing a shark with a power saw? Hell yeah. For science! The Jawzall is a reciprocating saw with a blade made from shark teeth. It was developed at Cornell University where they are just cool like that. 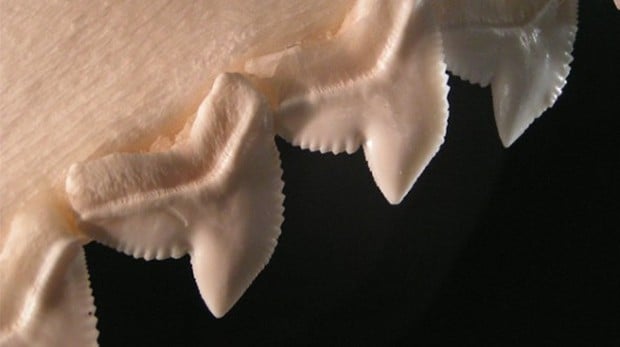 As you may know, sharks don’t have any way of holding their prey still while they take a bite. That’s why they shake their victims. Researchers wanted to know how shark teeth hold up to that kind of treatment, so attaching them to a saw blade seemed like a good idea.

So they basically glued shark teeth with different morphologies to the saw blade and let them tear through some raw fish. They used teeth from a sandbar shark, a sixgill shark, a silky shark and a tiger shark. After each cut, they measured the amount of flesh sliced. As it turned out, the larger more serrated teeth were much better overall at causing damage. It took only six passes for the tiger shark’s teeth to sever the spine of a salmon. After 12 cuts, all the teeth had worn down quite a bit. They cut only about 7% as much tissue on the 12th run as they did on the 6th.

So now we know that shark teeth make for a poor saw. And that researchers have cool jobs where they get to do crazy stuff.

[via PopSci via Geek]