Exploding Kittens is a new strategic card game by Matthew Inman, creator of The Oatmeal, along with his buddies Elan Lee and Shane Small. It is up for funding on Kickstarter right now. In fact, it reached it’s funding goal in just 20 minutes after being launched. After an hour it hit the 1000% mark. 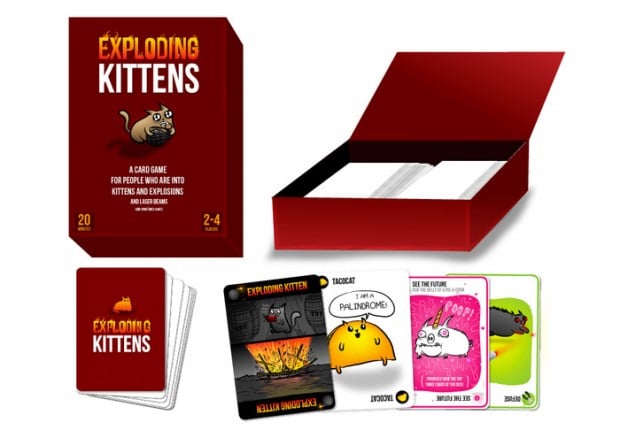 As I write this the game has raised $1,747,004 in just over 24 hours. Oh yeah. People really want to explode some kittens. God only knows where it will end when the funding concludes on February 19.

Exploding Kittens is a highly strategic kitty-powered version of Russian Roulette. Players take turns drawing cards until someone draws an exploding kitten and loses the game. The deck is made up of cards that let you avoid exploding by peeking at cards before you draw, forcing your opponent to draw multiple cards, or shuffling the deck.

The game gets more and more intense with each card you draw because fewer cards left in the deck means a greater chance of drawing the kitten and exploding in a fiery ball of feline hyperbole.

It sounds like a lot of fun. You can get a deck for just $20(USD). There’s also a version which includes some NSFW bonus cards for $35.