Bat Robot Can Fly and Walk

This bat inspired robot can crawl around on all fours and it can fly. Just like a real bat. That makes them already superior to us. Now picture the skies filled with these things. Thanks science. It is called DALER, aka Deployable Air-Land Exploration Robot. 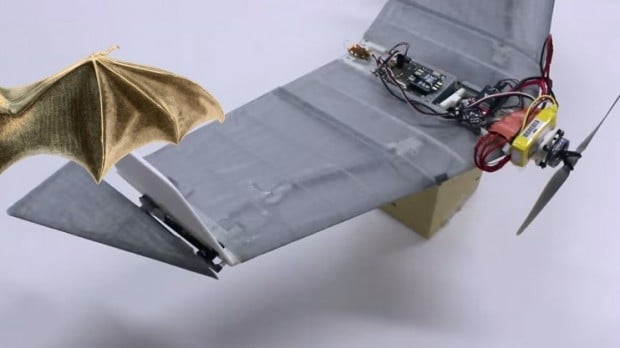 The crews at LIS, EPFL, and NCCR Robotics say that it was inspired by the common vampire bat. It has foldable, shockproof wings, and it crawl on the ground just like a bat. DALER can reach 20m/s in the air and 6cm/s crawling on the ground or the floor. Instead of spending it’s life hanging upside down all day and feeding on insects, they hope that one day it may someday take part in natural disaster rescue missions.

Check out how its wings fold in the video. Then watch how it crawls. Creepy stuff. Scientists are creating so many animal robots, that I firmly believe they will all fight one day to see who is the supreme robot race.