Celluon’s PicoPro is a tiny, battery-powered projector that fits in the palm of your hand. It can project clear images on any white surface without the need for external hardware other than a smartphone. It can use HDMI or wireless devices that support Miracast wireless video as its sources. 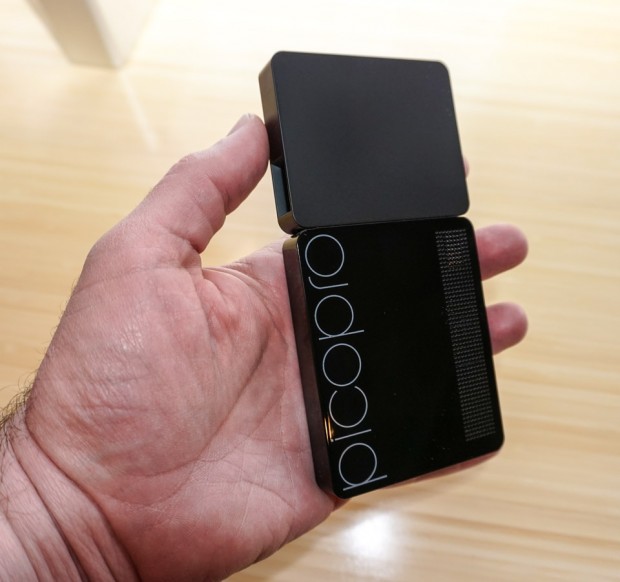 What struck me first about the PicoPro was just how compact it is. It’s virtually the same size as my iPhone 6 Plus, but about 1/2″ thick. And it weighs just a hair more, at just 6.7 ounces. It’s also completely silent while turned on, since it needs no cooling fan. 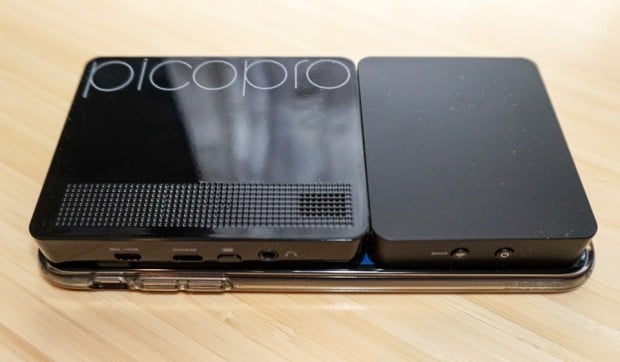 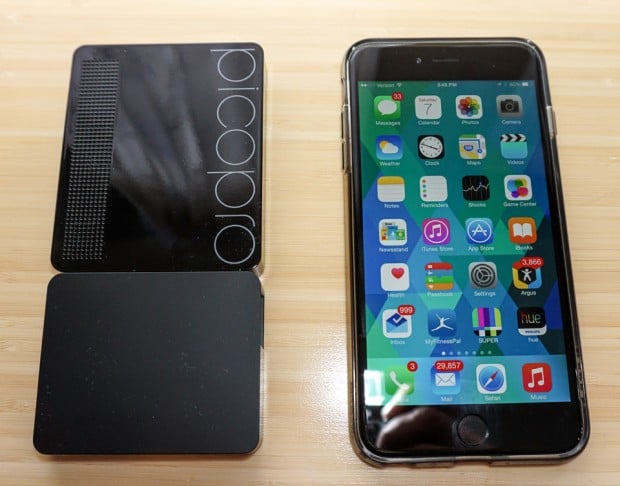 The projector uses laser technology to produce a sharp and reasonably bright image for its size, and requires no focusing to remain sharp. Connecting a device is easy, either plug in an HDMI cable to your device (in my case I needed an adapter for my iOS device), or you can wirelessly pair Android and Windows Phone devices that support Miracast. It also supports DLNA compatible devices. In HDMI mode, you can expect about 3 hours of runtime, or on wireless about 2 hours. Either way, it’s long enough to watch many movies without running out of juice. The PicoPro also has a tiny speaker built in, but it’s not even as loud as the speaker in most smartphones, so you’ll want to hook up an external set of speakers or headphones if you need audio.

I tested the PicoPro with both an iPhone 6 Plus via HDMI and an LG G3 via Miracast, and both worked flawlessly. Of course, the wireless connection is so much more convenient. I really wish that it worked wirelessly with iOS devices too, but I’m pretty sure this is a limitation of Apple’s AirPlay licensing, not Celluon’s hardware. 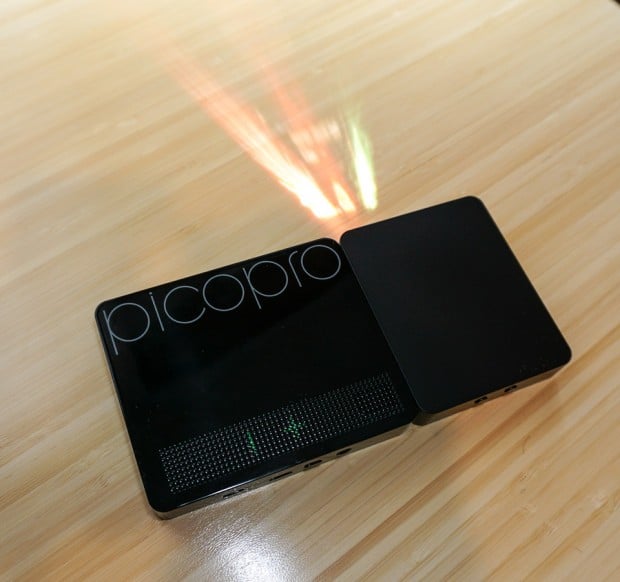 The projector is spec’d at 1920×720 native resolution, which is an odd, since the 1920 is the typical horizontal resolution of a 1080p display, and the 720 is the normal vertical resolution for 720p. Regardless of numbers, the image is crisp enough for watching movies, playing games, and business presentations, but it’s not quite full HD resolution.

When asked for clarification about the PicoPro’s resolution, here’s what Celluon told me:

1920×720 resolution is an attribute of the display engine at the heart of the PicoPro/PicoAir. MicroVision’s PicoP® Display Technology uses a proprietary scanned laser beam methodology that has a fundamental advantage of supporting multiple output resolutions with a single MEMS mirror, as opposed to being limited to fixed resolutions like panel based displays. The number of pixels painted is dynamic, not fixed as in a panel. To achieve 1920×720, the image resolution is enhanced by upscaling the horizontal pixels from 1280 input to 1920 output. To maintain a standard 16:9 aspect ratio the display engine creates non-square pixels. The result is an image that surpasses the resolution and quality a typical 720p display by fitting more pixels into the space. 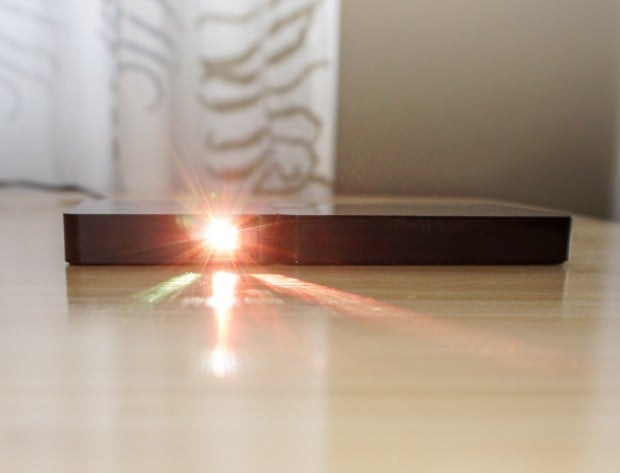 The images below were projected in a darkened room (not pitch black) against a white wall, with the image at approximately 50″ diagonal. 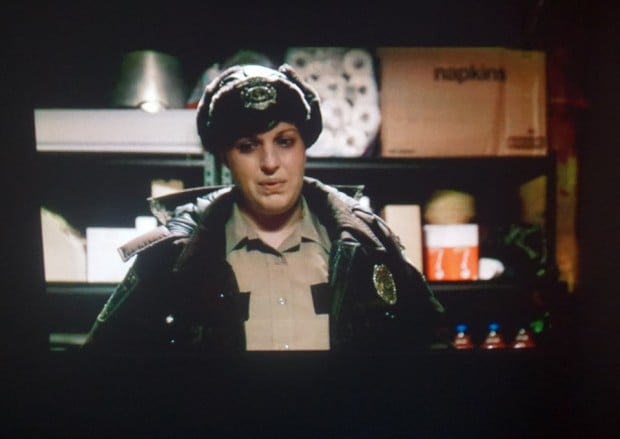 Celluon claims the PicoPro has an 80,000:1 contrast ratio, but I don’t have the equipment on hand to measure that. To my naked eye, images have good contrast, bright colors, and aren’t muddy. 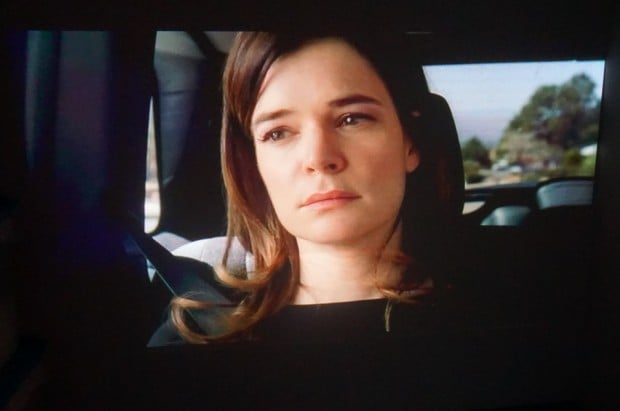 Keep in mind that this tiny projector, while brighter than many other pico projectors I’ve seen – is still best used against a pure white surface, and in a darkened room. If you must use it in a room with ambient light, you’ll definitely want to use a white wall or a projection screen. 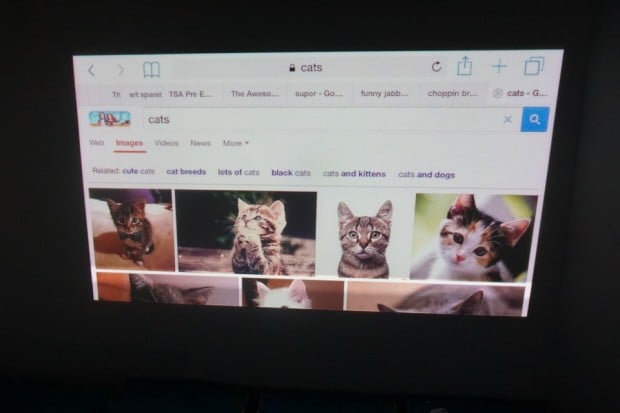 In the optimal environment, it can actually project an image up to about 100″ diagonal. I tested its ability to scale up, and the image stayed sharp, but was quite dim. That said, the only wide open wall I had that big wasn’t white, so that’s not a fair test. I’m reasonably certain that a white surface would make all the difference in the world.

Out of the box, it’s a bit tricky to get the projector aligned with projection surfaces if you set it right on a table, but Celluon ensures me that the production model of the PicoPro will include a small tripod mount which should make setup and alignment much easier. 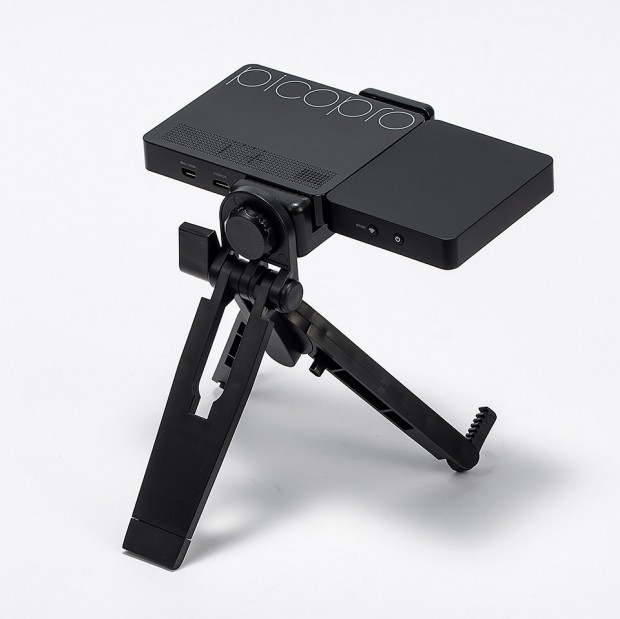 Regardless of its limitations, the PicoPro is a marvel of modern technology. If you had told me 10 years ago that I’d have a projector I could carry in my pocket, and required no external power supply or wires, I would have thought it was pretty far-fetched.

Celluon has yet to announce final pricing or a release date for the PicoPro, but is already selling its PicoAir projector for $350(USD), which is a wireless-only version for those who don’t need the HDMI connectivity.