One of the PlayStation 4’s worst flaws is the short battery life of its controller. The DualShock 4’s always on LED exacerbates the issue, but the fact is it has a low-capacity battery. You can buy Nyko’s external battery to alleviate the issue, or you can go the DIY route and follow Redditor AtariXL’s guide. 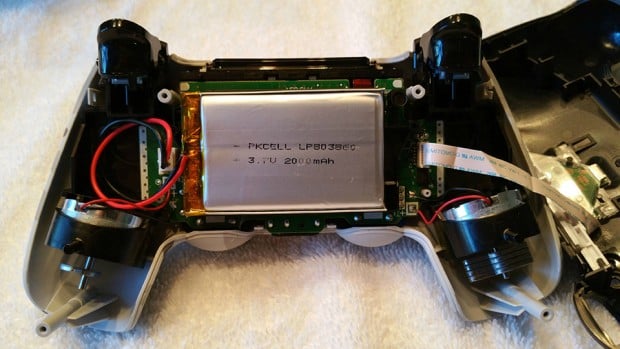 AtariXL replaced the DualShock 4’s stock 1000mAh battery with a compatible 2000mAh battery from Adafruit. You can check out his build log in the Imgur gallery below. It’s a straightforward process, but AtariXL does have an important reminder: “When switching the battery leads (pic 6-8) DO NOT ALLOW THE WIRES TO TOUCH!”

The guide starts with the controller already opened; check out iFixit’s battery replacement guide if you don’t know how to do that.

AtariXL says the controller’s battery meter won’t accurately reflect the new battery’s capacity, but in his tests it lasts up to 13.5 hours per charge, which as expected is twice as long as what he was getting on the stock battery.