Head-mounted displays (HMD) have been around for years, though they tend to be prohibitively expensive. Caputer Labs is touting its Seer as an augmented reality display, though it could end up simply being a cheap HMD instead. 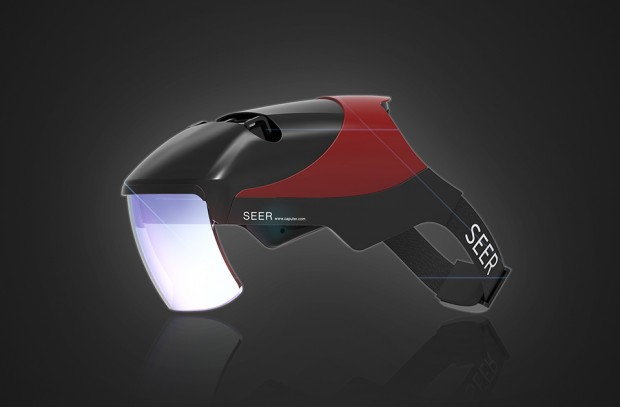 Seer is meant to project and magnify a smartphones’ display and will work with smartphones that have screens between 4″ to 6″. Its mirror reflects the smartphones’ display onto a single lens that’s a few inches in front of the wearer’s eyes. Caputer Labs claims the view from the 100º field-of-view lens can be the equivalent of looking at a 200″ screen from 8ft. away.

Despite the enticing claims in its pitch video, Seer has no sensors of its own and relies completely on apps and the ever fragmented world of smartphone hardware for augmented reality features. On one hand, this helps drive the product’s price down and gives developers more freedom to use the tools they’re comfortable with. On the other hand, that makes Seer the Google Cardboard of augmented reality: a barebones display that has no interactive capabilities. Check out Seer’s demo videos and you’ll see what I mean:

The VR mode mentioned in the demo videos involves attaching a light-blocking plate over the Seer’s lens. In other words, Seer’s VR mode simply means making the display opaque; it’s still not stereoscopic 3D. Caputer Labs will also release a Seer variant that has a 5″ 1080p LCD display with an HDMI output, so instead of putting a smartphone in it you’ll connect it to a console or PC.

Unless millions of people buy it – turning it into a standard of sorts – Seer’s success as an augmented reality display is suspect. But if it’s well built I can see people getting one just so they can have a large display on the go. That’s well and good, but it’s hardly Tony Stark territory.

Pledge at least $99 (USD) on Kickstarter to receive a Seer headset as a reward. The Seer with a 5″ display is offered as a reward for pledges of at least $198.