Since retiring in 2002, mechanical engineer and bioengineer Seth Goldstein has spent a lot of his free time making kinetic sculptures. You may have heard of him before as the creator of the Why Knot?, a machine that continuously ties and unties a necktie. His latest creation is RO-BOW, a robot that plays a full-size violin. 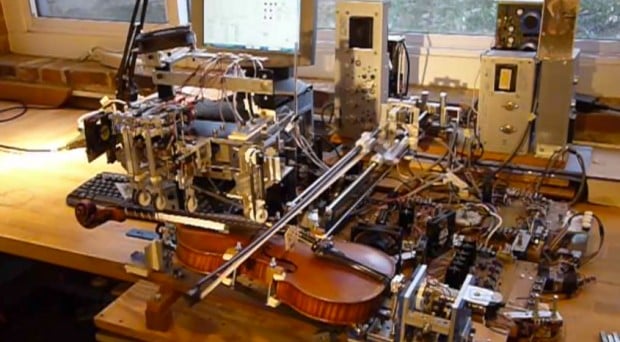 RO-BOW relies on a custom computer program that turns MIDI files into instructions for its actuators, which move four disc-shaped fingers over the neck as well as the cradle carrying the violin’s body. While its design allows it to play any note, it might not be fast or subtle enough for some songs. Still, I’m sure RO-BOW would rake it in if it were a busker.

It sounds like a beginner practicing the instrument, but I’m still in awe at this robot. At least until someone replicates it with LEGO.