After the 2011 tsunami in Japan, designer Chris Robinson and his friends bounced around ideas for ways to survive such a disaster. One of their ideas was for a spherical escape vessel. After doing a bit of research, Chris decided to pursue the idea by actually building it. The Tsunamiball was born. 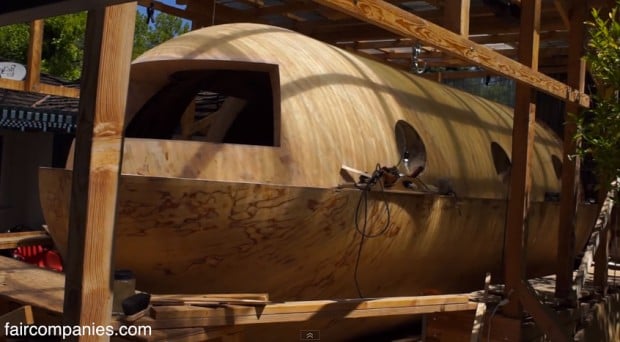 Chris’ main inspiration are the escape pods used in some oil rigs. He’s making the Tsunamiball out of dozens of layers of marine plywood, aeromarine epoxy and eventually floatation foam. The idea is for the vessel to be kept on land, withstand the impact of water and debris when a tsunami hits and then stay afloat, keeping its inhabitants safe for a short while.

Chris started his pet project back in 2012 and thought he’d be done by 2014, but so far he’s still building, learning and having fun. Check out Faircompanies’ great interview with Chris to learn more about the boat and why Chris is building it:

See Yoda? Trying’s not so bad. Check out Chris’ website for more on the Tsunamiball.