NASA Thinks One of Saturn’s Moons Could Support Life

NASA launched the Cassini spacecraft way back in 2004 on a mission to orbit Saturn and study the planet and its moons. One of the most interesting things to study in Saturn’s orbit turned out to be its icy moon Enceladus. This moon has lots of geysers that shoot material into space and that material ends up eventually orbiting Saturn. 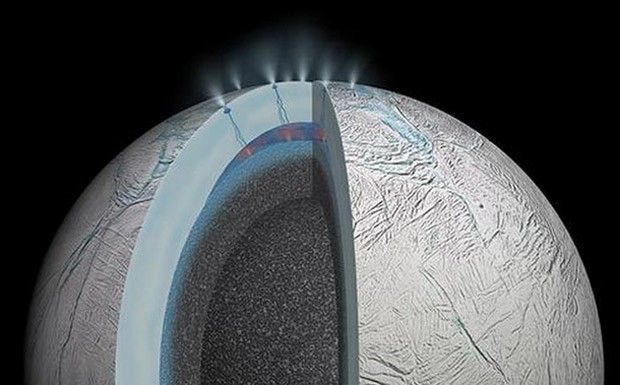 Cassini has used its Cosmic Dust Analyzer to look at that dust and has found that some of it is silica. Here on Earth, the way most silica is formed is by hydrothermal activity. The researchers believe that this silica is being formed in hydrothermal vents deep beneath the icy surface of Enceladus.

Silica needs temperatures of at least 90ºC to form. That leads the researchers to believe that the water under the surface of Enceladus is warm enough to potentially support life. After the silica is formed in these hydrothermal vents, it makes its way to the icy surface of Enceladus where it is trapped in ice, eventually spewed into space by the geysers where the ice erodes, and eventually silica is left orbiting Saturn where Cassini sniffs it up.