Alex Pring now has one heck of a story to tell his friends. Not only did the 7-year old meet Iron Man, the Avenger met him to deliver his robotic arm. Alex was born with a partially formed right arm, but now he has the opportunity to upgrade it and make it look like all sorts of things. And Robert Downey Jr. is merely the witty icing on this cake. 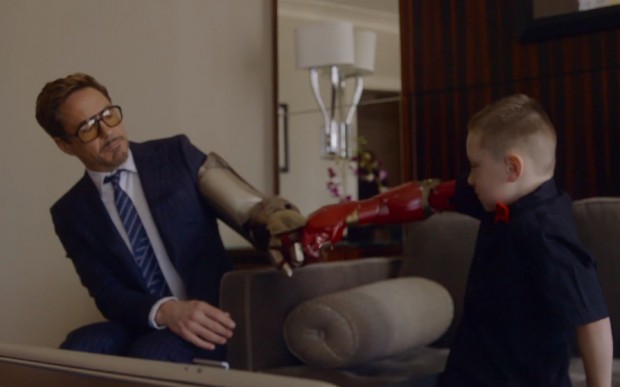 Microsoft’s The Collective Project set up the meeting between Alex and Robert Downey Jr. Here’s what happened:

If you’re wondering why Alex doesn’t seem blown away by RDJ’s gift, it’s probably because Alex was already using an older version of the arm. That’s where the real heroes come in. Alex’s arms – including the special Iron Man-themed one – were developed by Albert Manero and his colleagues at Limbitless Solutions. Alex’s mom got in touch with Alex through E-NABLE – an organization that makes low-cost 3D printed mechanical arms – but Albert wanted to give the kid something better than a mechanical arm.

Albert formed a team made of fellow University of Central Florida students and together they designed and built a robotic arm for Alex. The team would eventually form Limbitless Solutions.

It cost Limbitless Solutions $350 (USD) to build Alex’s arm, but they gave it to Alex for free. They’ve since helped another child gain an arm. The group is accepting donations so they can help more kids.