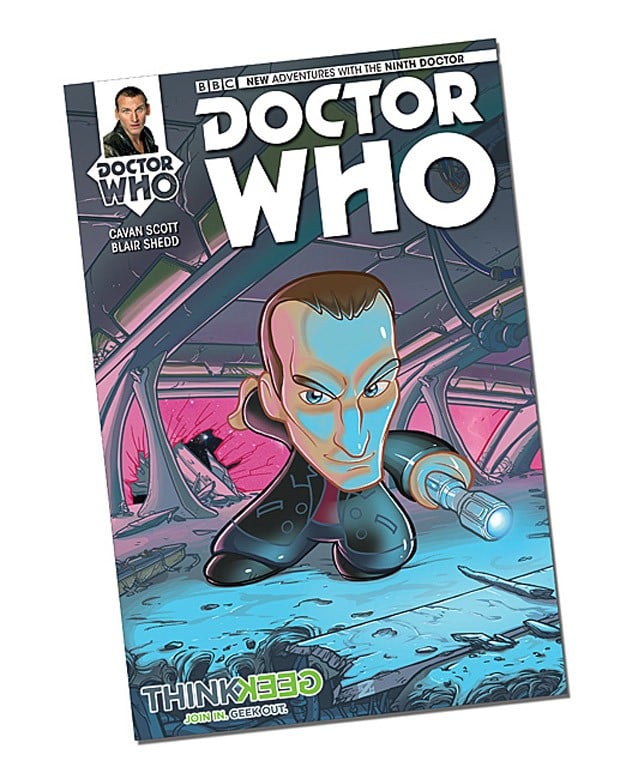 The comic book starts a new adventure based on the 9th Doctor. The cover shows a Titan vinyl figure version of said doctor, which is an exclusive variant just for ThinkGeek.

D’you wanna come with me? ‘Cause if you do then I should warn you; you’ll see all sorts of things. Ghosts from the past. Aliens from the future. The day the Earth died in a ball of flame. It won’t be safe, it won’t be quiet, and it won’t be calm. But I’ll tell you what it will be; the trip of a lifetime!

Those words were spoken by The Ninth Doctor, and now he’s back with a brand-new miniseries: Weapons of Past Destruction! Leaving World War II behind, The Ninth Doctor, Rose, and Captain Jack discover that Time Lord technology (lost in the wake of the Time War) is being sold on the intergalactic black market! Now the threat of a NEW temporal war brews on the horizon. Can the Doctor stop history repeating itself?

The comic was written by the co-author of the “Who-ology” book Cavan Scott. It’s standard comic book size and you can get it for $7.99(USD).