Wallace The Rabbit Eats His Castle

When last we saw Wallace the rabbit, he was eating his Game of Thrones Iron Throne that his owner made for him using carrots. Since then his hunger for power has only increased. 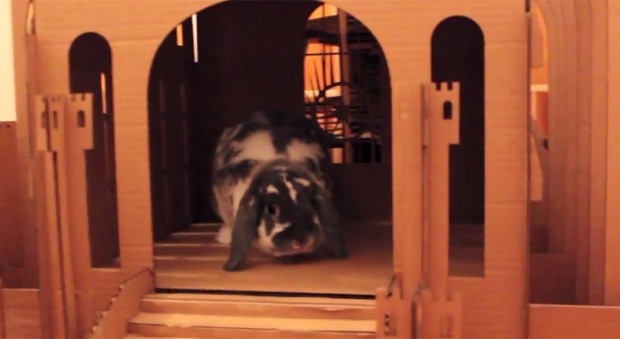 Wallace’s owner is a big Game of Thrones fan. Obviously. I guess he figured, if your bunny eats a carrot throne, he will likely eat the whole castle. So he built the cute bunny an entire Red Keep from cardboard and yes, the bunny did not disappoint.

Wallace’s rule over the Red Keep began with great promise. He surrounded himself with wise and vigorous advisors (almost exclusively comprised of his turds and hairballs) and effectively crushed the Raisin Rebellion soon after becoming king.

However, Wallace almost immediately spiraled into madness when he realized that his castle was made of cardboard and his throne of carrots. He experienced vivid hallucinations, hearing voices in his head that told him to either chew on or fully eat every object in his presence. Rumor was that he had hidden “wildfire” around our apartment in order to transmute into a dragon through a fiery baptism but I am pretty sure that didn’t happen.

In the end, when Wallace looked around and saw what his insane hunger had wrought, his joy definitely turned to ashes in his mouth.

Wallace the Mad. That’s what history will know him as. He’s crazy, but adorable.

[via The Creators Project via Laughing Squid]