If you think robot fights are clumsy and silly, YouTuber Team Velocity is here to prove you wrong. He recently shared one of his matches at this year’s RoboGames, and it is a fast-paced and brutal affair. 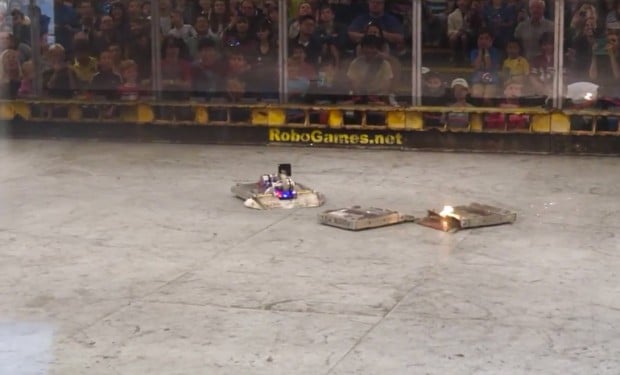 Team Velocity’s K2 competes in the 60lb. division. In RoboGames, competitors can enter multiple robots as one unit, provided their total weight meets the division limit. In this case, K2’s opponent Terrible Toos are two 30lb. robots. K2 is armed with a wedge and a one-toothed disc spinning at 5,000RPM, while the Terrible Toos also have wedges but also have flamethrowers. Skip to 1:09 for the fight:

K2’s winning strategy is to give you the finger over and over until you flip out yourself. If you think Team Velocity’s tactic is too cheesy, well, you’d be right. Here’s a video of him losing to a similar robot. Head to RoboGames for more info on its events – combat robots is just one of its categories – or head to Team Velocity’s YouTube page for more steel on steel action.