Google Maps Brings New Meaning to a Search for Nessie

It is perhaps the most famous monster photo of all time. Appearing in England’s Daily Mail on April 21, 1934, it was snapped by London physician Robert Kenneth Wilson and became known as the “Surgeon’s Photograph.” We’ve all seen it countless times – a creepy snake-like head jutting out of the dark waters of Scotland’s Loch Ness. The image was later discovered to be an elaborate ruse created using a toy sub. 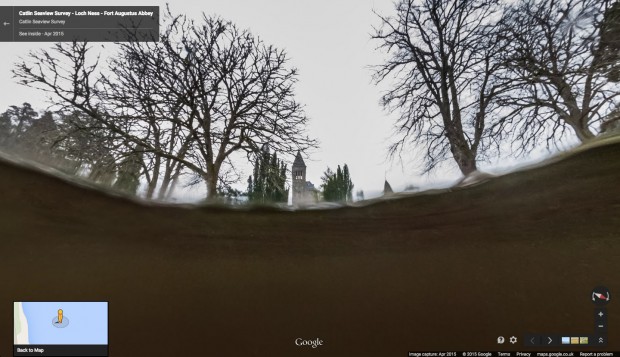 Even though that photo was proven not to be a real portrait of Nessie, many still believe a giant beast actually haunts the Loch. To mark the date the image was taken, Google posted a host of its Street View images of both the surface of the Loch and what it looks like under the surface so that explorers around the world can scan the terrain themselves in search of the infamous creature.

What’s crazy though, is that one of the 360-degree images you can view is titled “Bird, log or monster?” And when you click into it you can clearly make out four small black bumps breaking the surface that look a heck of a lot like Godzilla’s tail slipping back beneath the water. I certainly don’t believe in the monstrous myth, but after seeing that Google pic I won’t be taking a dip in Loch Ness anytime soon.