Hydrographics or water transfer printing lets you apply graphics to objects in one pass. It gives a uniform finish and can be used even with large objects. And watching it is a great timewaster. But it’s not ideal for items with complex shapes, and it can be used to apply only graphics with repeating patterns, because it’s hard to align the film that holds the pattern with the substrate object. Until now. 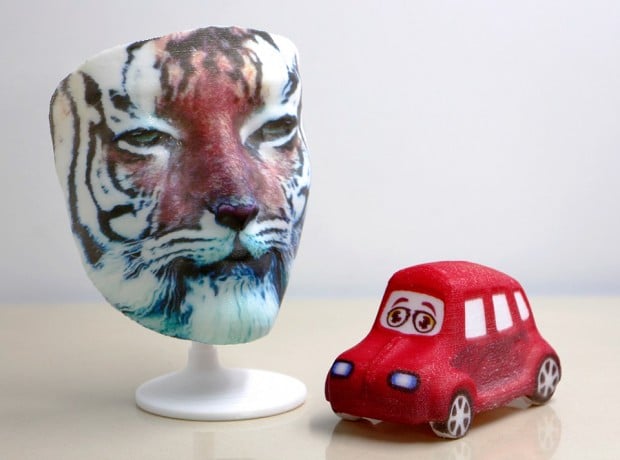 Students from Columbia University and Zhejiang University presented their computational hydrographic printing system (pdf) at SIGGRAPH 2015. To make it easier to understand this breakthrough, compare the image above with the one below. The patterns on the objects above were printed using the students’ setup, while the ones below were applied using traditional hydrographics. Note how the latter only has simple patterns, while the mask and the car above have a variety of details that are right where they should be – the eyes, nose, headlights, wheels etc – as if they were painted on. 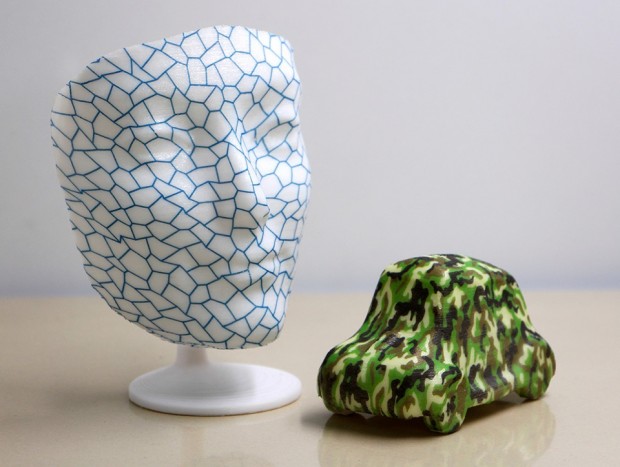 The solution is a combination of hardware made from off-the-shelf parts and the group’s custom software. The student’s hydrographics machine has a depth sensor (e.g. a Kinect) that analyzes the object’s shape as well as its orientation and location relative to the machine’s vat. They combine this data with the group’s virtual simulation of how the film holding the pattern will behave. The simulation predicts exactly how the film will stretch and distort when an object of any given shape is dipped into it.

From there, they can print a pattern that fits exactly on the substrate object (assuming the printing machine dips and holds the object in the recorded position). Because the system can record an object’s shape and print patterns with extreme precision, it can even print multiple patterns separately on the same object.

As noted in the video, this has a lot of applications, but one that’s particularly interesting is its potential to serve as an alternative to colored 3D printers. If you want the colors to only be on the surface of a printed object, perhaps this will be more economical and precise. Download the students’ paper from Columbia University (pdf) for more on their project.