Play Through the Fire and Flames literally through fire and flames with the Sound Torch. It’s a bluetooth speaker with a built-in burner on top, which emits flames that are synchronized with what’s playing. 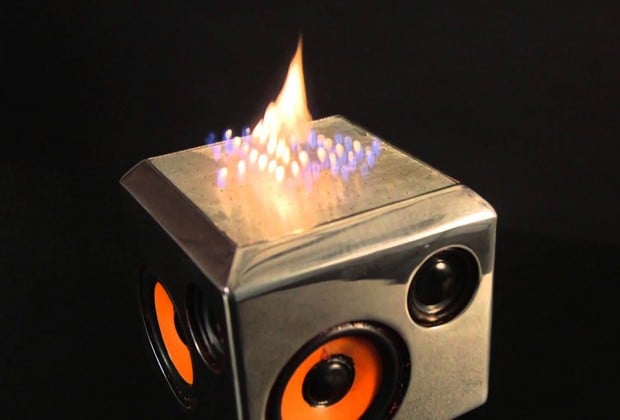 The Sound Torch can play audio for up to 12 hours per charge, while its lighter fluid container holds up to 4 hours worth of fluid. Its flamethrowing feature works like a flame tube, where the sound coming from the speaker affects the amount of flammable gas escaping through the perforations. You can see examples of how Sound Torch’s fire looks like with different types of music on its YouTube channel.

The speaker will also have an app that will let you modify the Sound Torch’s burner. For instance, you’ll be able to keep the flames steady regardless of the music, adjust the height of the flames or even pick from fire templates. You’ll also be able to link and manage up to seven Sound Torches using the app. Alternatively, you can plug in an audio source via the 3.5mm input behind each Sound Torch.

As a safety precaution, the Sound Torch will automatically turn off its burner if it’s knocked down or if it reaches a certain temperature threshold. It will also shut off completely if it’s not paired with any device.

Pledge at least ~$159 (USD) on Kickstarter to receive a Sound Torch as a reward.