I just saw a post on Time.com about a patent Google has filed for a high-tech Teddy Bear. (Hey, it had to happen sooner or later.) So I clicked on the link to read the patent application and what I found was pretty darn freaky.

At the bottom of the first page are line black and white line drawings of both a Teddy Bear and a stuffed bunny rabbit. The pair look, well, not like the friendliest kids’ toys I have ever seen (I’d describe the look in the bunny’s eyes as borderline demented). The drawings also show where motors, microphones, cameras and speakers would be mounted or inserted into the plush toys. So at first glance it looks like they’re probably going to dance, sing, talk and keep an eye on your kid. 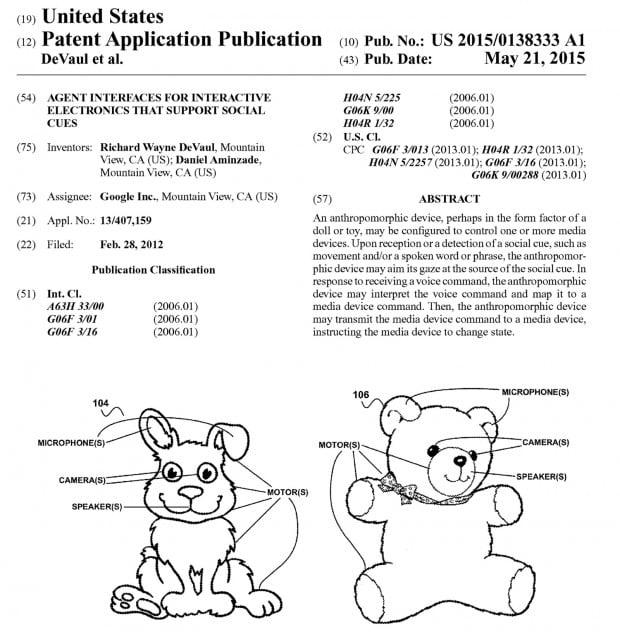 But the abstract of the patent goes a bit deeper into exactly what Google is up to with these creations. It describes them as, “An anthropomorphic device, perhaps in the form factor of a doll or toy, may be configured to control one or more media devices.” It goes on to explain that when spoken to or gestured at, the toys will then cause a “media device to change state.” To me what that sounds like is that Google is developing a new remote control interface in the form of a baby toy, which seems pretty low on the list of things currently needed by most of mankind. There is, however, no reference in the document to whether or not the bear or bunny will be able to run to the fridge and get you a snack.