Saturday Night Live’s Weekend Update is one of the great comedy franchises in history, and some amazing talent has sat behind the anchor desk. The show’s professional news mockers have included Chevy Chase, Bill Murray, Jane Curtin, Dennis Miller, Seth Myers and Jimmy Fallon. But for my money, the sharpest ones were the brilliantly snarky and energetic duo of Tina Fey and Amy Poehler. And now the two are coming back to SNL’s anchor desk – in a manner of speaking. 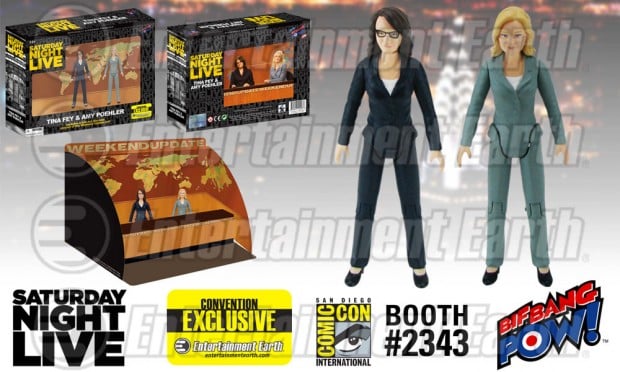 Bif Bang Pow! has announced that they are creating a set of 3-1/2 inch action figures of the two comedians in their anchor suits, and they come in a box that opens up to become the iconic SNL Weekend Update desk. The pair, which will cost $29.99(USD), will not be easy to acquire, however. Only 2,400 will be made, and people attending the San Diego Comic-Con in July will get first dibs. You can pre-order yours from Entertainment Earth now, but if they sell out in San Diego, you’ll be out of luck. My prediction – if you’re not going to the convention and you want this set, you’ll be getting it off eBay for a lot more than 30 bucks.