You Can Buy your Own Star Wars Battle Pod!

Last year I talked a bit about some sweet new Star Wars games that were landing in arcades around the world. The games are called Star Wars Battle Pods, and if you have deep pockets and really hate standing in line, you can now buy these for your home. 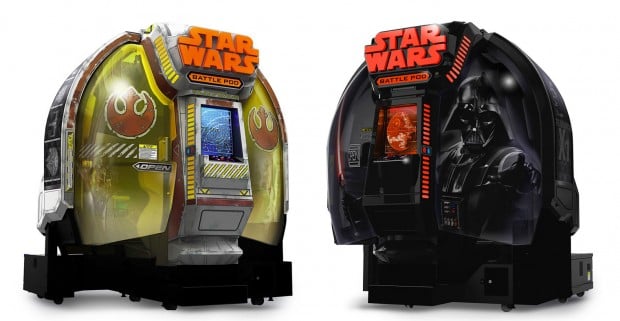 Bandai Namco has now announced that you will be able to purchase the Star Wars Battle Pods with two versions available. The standard version is about $36,000 and a Premium version just south of $100,000. The premium version is much fancier, but it seems you get the same game play.

The premium version are pictured and come in a Vader themed unit or one that looks like a rebel helmet. Premium units also have movable leather seats, carpet, fancy one-of-a-kind owner’s manuals and such. Shipping isn’t included and I’d bet that will add thousands more to the price.