I am a big fan of lasers. I hope that one day before the zombie apocalypse happens we can develop functional, handheld laser weapons. In advance of this, one geek has created an awesome laser shotgun that won’t kill the undead, but might fry your eyeballs right out of their sockets. 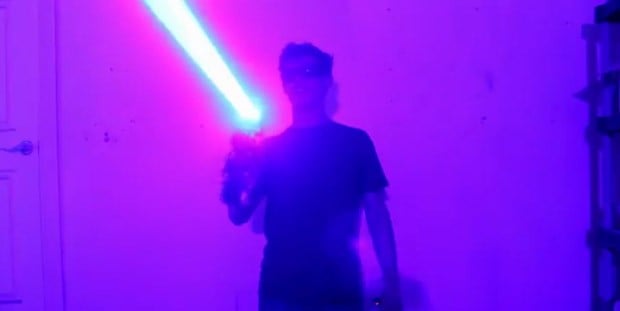 The dude going by the moniker styropyro on YouTube combined eight parallel 5W lasers into one massive 40W laser beam by shooting them through a focusing lens. The result looks awesome, though if he were to shine it into the night sky anywhere near the vicinity of an aircraft, he’d surely go to jail.

It has enough power to do little things like pop balloons and set fire to wood and ping pong balls. Before you get too impressed, the laser the Navy uses to shoot down aircraft has 30,000 watts of power.